A Winter Tale stands out amid stiff competition and gets held over in Trinidad cinemas!

A WINTER TALE, the award-winning feature film by Frances-Anne Solomon, has been held over for another week by Movie Towne and Cinemas 8, Trincity. The Movie which premiered at a glamorous 40-foot Red Carpet Launch at the historic Globe Cinema in the heart of Port of Spain on May 14, has been receiving rave reviews from patrons for its well-written and relevant storyline, strong character acting and high production values.

‘A WINTER TALE opened commercially and held its own against the two biggest Hollywood releases of this year – Indiana Jones and The Chronicles of Narnia. This is an incredible achievement for a small independent movie. I am grateful to the cinemas – Trincity, MovieTowne and Hobosco for their faith in the film, and especially to the Trinidad public for showing that local films have an audience here.’ Says Solomon.

Last week, patrons attending the film were pleasantly surprised to be greeted by Lead Actors, Peter Williams (of Stargate SG 1, Chronicles of Riddick and Cat Woman fame) and Michael Miller who flew in from Canada for the first week of screenings, and signed posters for fans. 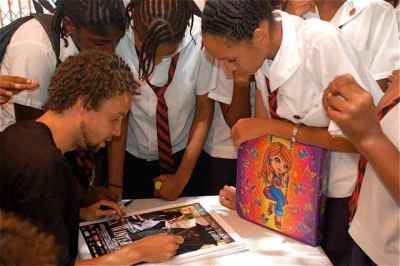 Hundreds of high school students also had the opportunity to see the film during a special series of Ministry of Education-sponsored school screenings, where Williams and Miller along with Director Frances-Anne Solomon signed posters and held “Talk It Out” sessions on the content and impact of the film.

A WINTER TALE also stars well-known Trinidad actor Dennis ‘Sprangalang’ Hall in is his first serious role in a feature film. In the story, his 10-year old grandchild is murdered in a drug deal gone sour and the film looks at the community’s response to this heinous crime.