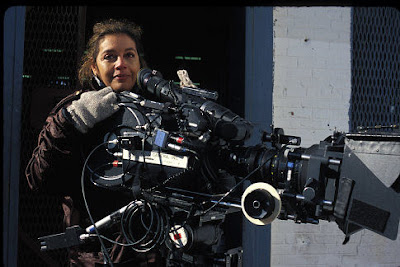 Hollywood film director Neema Barnette, best known for her work as one of the original directors of the Cosby Show will be coming to Barbados to lead a Masterclass in Directing at the CaribbeanTales 2011 Film Festival.

This event, which is facilitated by the United States Embassy, will take place on March 20th at the Island Inn, followed by a screening of her film Zora is My Name!, at George Washington House.

During her visit to Barbados Ms Barnette, who is also a Professor at the renowned UCLA School of Film and Television and adjunct Professor at NYU, will attend a screening and talk back session of her film Run For The Dream: The Gail Devers Story for secondary school students, on March 14th; and participate as a Tutor at the CaribbeanTales Intensive  Content Incubator that runs throughout the week.

Ms Barnette is a multi-award winning film and television director and NAACP award recipient, with a directing portfolio that includes such projects as the Gilmore Girls, The Cosby Show, 7th Heaven and many films.

Director of the festival, Frances Anne Solomon expressed delight at the tremendous opportunity of having such an acclaimed filmmaker on board for this years’ program. “It is an absolute honour to have Neema Barnette join us for the festival, especially since our focus this year is on producing television series. She is an amazing film maker and person, and will lend so much experience and passion to the workshops. This is really a big treat for us.”

Solomon also disclosed the details of other workshops that will take place over the week-long event. These will include Introduction to Film Making, led by Barbados Film and Video Association president Rivelino Simmons, a two-day event targeted at complete novices to the audio visual medium, who are seeking to cross-over; a workshop focussing on Adapting Literature to the Screen, led by experienced South African Producer and former commissioning Editor  Kethiwe Ngcobo; The Anatomy of A Film Score that explores the unique role and use of Music for Film led by multi-award-winning Canadian composer John Welsman, and, “From Script to Screen”, a reading of 3 scripts developed by Penelope Hynam and Beatrice HallenBarter from their “Growing Up Caribbean” series of short films on childhood.

Despite her illustrious career in Hollywood and mainstream US television, Ms Barnette still calls herself  “a director from Harlem”, and has also operated her own production company, Harlem Lite Productions since 1987 and is Executive Director of Live Theatre Gang, an urban theatre and performance company.

The Caribbean Tales Film Festival 2011 @ Island Inn, Barbados runs from March 14- 20, 2011. The festival will include an Incubator Program for Caribbean audio-visual content development starting on March 14, a Symposium, Marketplace and Workshops as well as Screenings of films from the Caribbean and its diaspora.