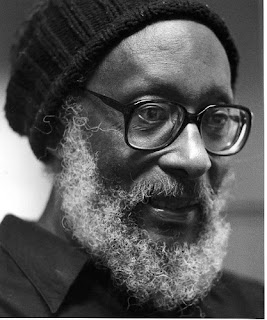 Celebrated Caribbean poet/historian/cultural critic Kamau Brathwaite will host a selection of films from the Best of CaribbeanTales Film Festival 2010 (CTFF), at New York University from April 26th to May 1, 2010. The four day mini-festival is part of Marassa 10 2010 : A Festival of Caribbean Film, Story and Imagination, that will take place at the Institute of African American Affairs, 41 East 11th St., 7th Floor.

Barbados-born Dr. Brathwaite is currently Professor of Comparative Literature at NYU. Since the 1950’s he has authored many outstanding ground-breaking works, including poetry and non-fiction, and awards recognising his achievements include the Guggenheim Fellowship, the Fulbright Fellowship, and recently, the Griffin Prize for “Born to Slow Horses”. He is best known for originating the concept of Nation Language to describe the indigenous Caribbean languages of peoples descended from slaves. His contributions to a discourse on contemporary Caribbean and Africentric culture are without parallel.

The complete list of film being to be screened is online here.

The stellar collection of films to be screened include six feature films and several shorts. On Wednesday April 28 at 6pm, the Opening Film is Stephanie’s Black’s masterful “Africa Unite”. Part concert tribute, part Marley family travelogue, this electrifying film follows the Marleys on their first-time-ever family trip to Ethiopia to commemorate Bob’s 60th birthday. Stephanie Black will be in attendance to participate in a talk-back after the film. (View the trailer for Africa Unite)

On Thursday April 29th at 6pm, Michelle Materre, curator of the”Creatively Speaking” screening series, will present Life Lessons, 4 short films by New York-based filmmakers of color. A Departure from A Love by Ishmael Islam, follows a young man’s walk through his beloved Brooklyn while reciting spoken word to a lover, while, The Lesson Plan by Eddy Duran follows a 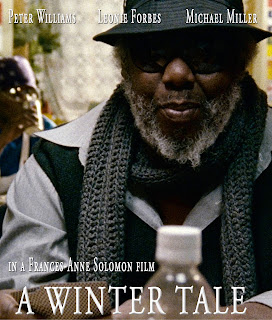 Brooklyn school teacher on the verge of a nervous breakdown, as he constructs an unusual Lesson Plan for students, drawing on letters by 18th century slave owner William Lynch, (after whom the term “lynching” was coined). This film premiered at the Cannes Film Festival, in 2009. As well, Sticks and Stones by Rehema Imani Trimiew exposes biases in the NY education system that prejudices black kids; and, Premature by Rashaad Ernesto Green tells of Tisha, a streetwise Bronx teenager from the Bronx, who gets unexpected news.

At 8pm on Thursday April 29th, Frances-Anne Solomon’s multi-award-winning audience favorite A Winter Tale, set in the Caribbean community of Toronto, Canada, tells the emotional and gripping story of a group of Black men who come together at Miss G’s Caribbean Restaurant, to thrash out their differences and heal their broken community, following the shooting death of a young child. The filmmaker Frances-Anne Solomon will be in attendance. (View Clips/Trailer: A Winter Tale)

Friday April 30 at 6pm begins with 3 stunning shorts from the twin islands of Trinidad and Tobago : Directions by Renee Polonais, winner of the audience award at the T&T film festival 2008, is a hilarious look at the roundabout ways some Trinidadians give street directions, while Invisible by Multimedia artist Elspeth Duncan focuses on a woman called “Veronica”, and her daughters, facing the bitter effects of discrimination against people living with HIV/AIDS in Trinidad and Tobago. As well, Mami Wata is an evocative film exploration of Shango ritual, by Yao Ramesar one of the most accomplished and prolific Caribbean directors, who has made dozens of films on the people, history, and culture of Trinidad. 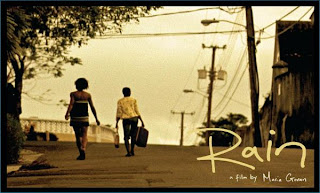 This will be followed at 8pm by Rain, director Maria Govans powerful debut feature, that follows a teenager Rain who goes to Nassau to find her mother, and discovers her living in a desperately poor, AIDS-ravaged neighborhood. One of the first films to be produced indigenously in the Bahamas, Rain reflects a striking visual contrast between the idyllic tourist setting and the harsh realities of everyday Bahamian life.

On Saturday May 1st, at 4.pm, two short films: The Legend of Buchi Fil by Surinamese filmmaker German Gruber, draws on slave folklore to tell the story of the strongest of the slaves whose will was only crushed when his beloved wife was killed. And, Drummit2Summit by Christopher Laird, “one of the most important and prolific filmmakers of the English-speaking Caribbean“(Richard Fung) records the events of 18th April 2009, when a group of protesters holding a public event in Port of Spain, Trinidad, during the 5th Summit of the Americas, faced down pressure from armed riot police, using drums, song, and the power of the media. 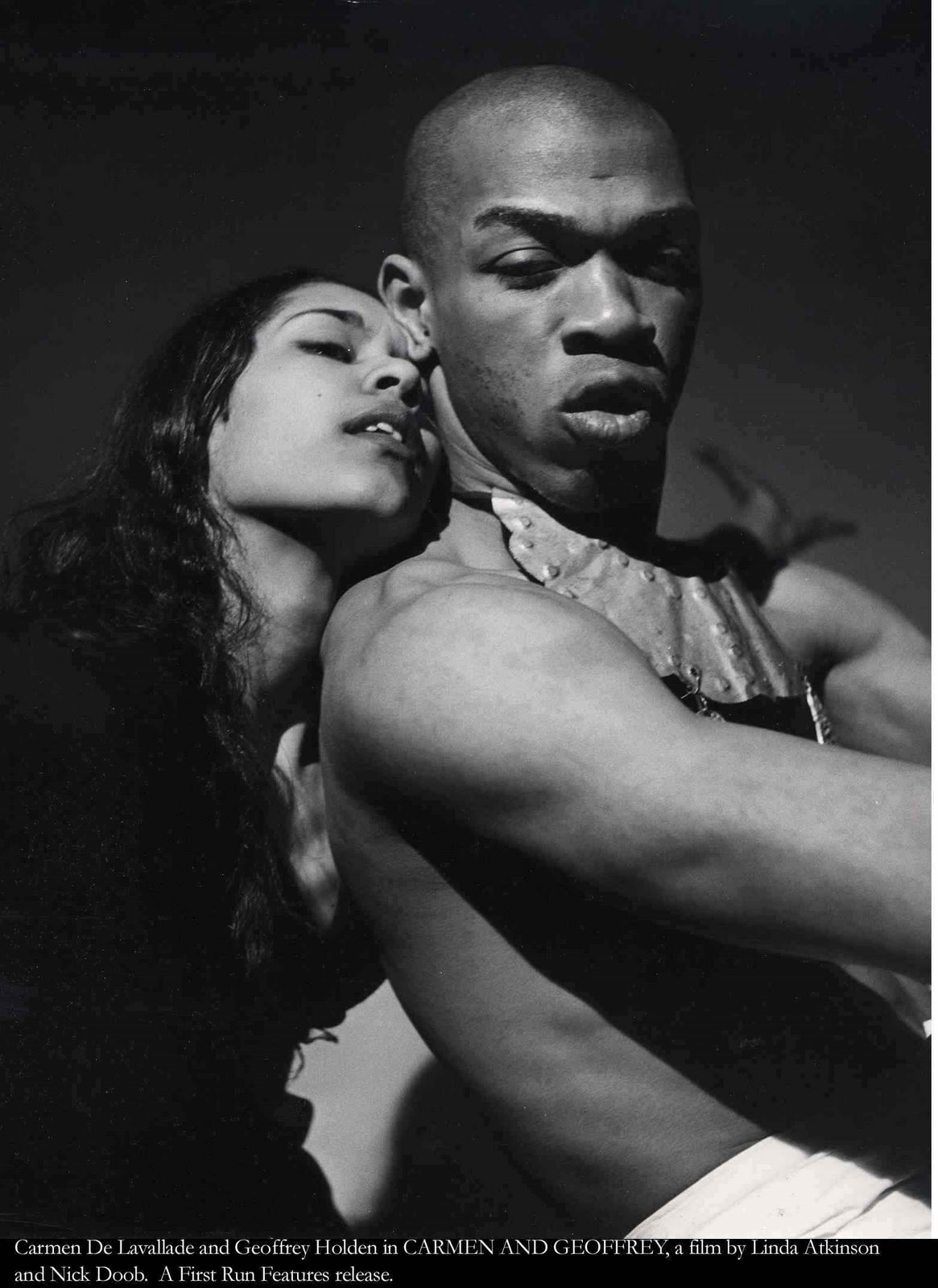 At 6pm, The Closing Feature is Carmen and Geoffrey by filmmakers Linda Atkins and Nick Doob, a beautiful documentary about the work of two exceptional artists, Carmen de Lavallade and Trinidadian Geoffrey Holder, and the fifty-four year long love affair and creative partnership that sustained their accomplishments. Linda Atkins and Nick Doob will attend the screening and and Talk back afterwards.

The CTFF was founded by accomplished British/Canadian-Trinidadian filmmaker Frances-Anne Solomon , whose most recent award-winning feature film A Winter Tale  has won international acclaim.”I am delighted to be able to present the best of the best of our Barbados 2010 line-up of CaribbeanTales films at NYU. It is an honor to be hosted by Dr Kamau Brathwaite who is a Caribbean icon, having contributed so much to deepening our understanding of ourselves and our culture.

Also this month, CaribbeanTales partners with the Festival International du Film Panafricain Panafrican in Cannes, France to bring a number of Caribbean titles to screens there, including Roger McTair’s Journey to justice; Fabulous Spaces, an exploration of the work of science fiction writer Nalo Hopkinson; Blood Dub and the Matriarch – Judy Singh‘s biopic of dub artist dbi.young.anitafrica; Jab by Alex Deverteiul; Gathering the Scattered Cousins by Akin Omotoso; What My Mother Told Me and I Is A Long Memoried Woman by Frances-Anne Solomon; Celebration by Yao Ramesar; Crack House by Camille Selvon Abrahams; and Glory to Gloriana by Lenny Little White, and many more. For the full festival programme, please click here.

The CaribbeanTales Film Festival is a Toronto-based event that takes place annually in July. This year the festival’s dates are July XYZ to July XYZ, when for the second year running, CTFF will partner with the Harborfront Island Soul Festival to premiere selected Caribbean films to Toronto audiences.

The Best of CaribbeanTales Film Festival 2010 – an offshoot of the CTFF – took place for the first time in Barbados this year, and included a Symposium on Global Distribution, the first-ever Caribbean Film Marketplace, Workshops/Masterclasses, and Youth Screenings.

CaribbeanTales mandate is to foster and encourage intercultural understanding and citizen participation through the medium of film, contributing to an inclusive Canadian society.