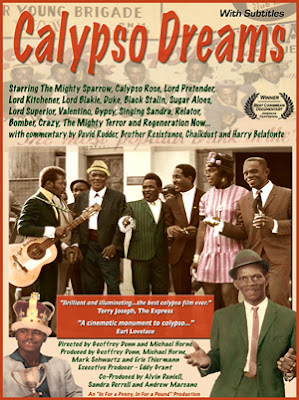 “Calypso Dreams is far and away the best film ever made about calypso….”
— Michael Goodwin, Caribbean Beat

The film also includes a rare and exclusive interview with Harry Belafonte on the issue of his early involvement with calypso and his complex relationship with Lord Melody in the ’50s and ’60s. Using a rich array of archival footage and photographs, Calypso Dreams is a celebration not only of the music of Calypso, but of the intense sense of community it engenders in Trinidad & Tobago, and of the art form’s dynamic social and political roots, which sustain it. Read more about Calypso Dreams.

The most famous calypso artists invite you to return to the roots of Caribbean music….

Directed by Pascale Obolo and filmed during carnival in Trinidad & Tobago, this rich and colourful documentary is a moving tribute to the Golden Age of Calypso. Featuring the last of the great calypsonians, bringing them all together to sing such classics as “Rum & Coca Cola,” “Jean and Dinah,” and “Shame and Scandal in the Family,” to name a few, the film provides an opportunity to recapture the sound of classic calypso in all of its splendour. Read more about Calypso @ Dirty Jim’s.

When everything she knew was gone, Rain searched for the only family she had left….

Director Maria Govan’s powerful debut, one of the first films indigenously produced in the Bahamas, shows a darker side of the country that tourists rarely see. Determined to reconcile with the mother who abandoned her when she was just a toddler, a Bahamian adolescent boards a local mail boat and sets sail for Nassau to find her own place in the world.

This multi-award-winning film had had its world premiere at the Toronto International Film Festival and has been broadcast on Showtime in the States.
Read more about Rain.

And…. Don’t forget to check out ctwdfilms ? our new YouTube channel ? featuring over 60 trailers and film clips to offer you a sampling of our eclectic roster of rich Caribbean cinema.