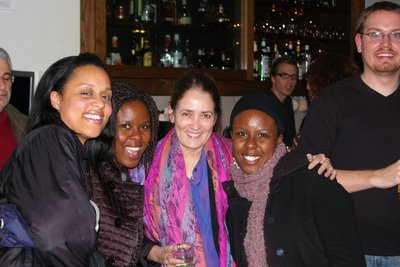 (Photo: Jamaican author Rachel Manley surrounded by her fans at the Launch of Literature Alive 2 .)

Many thanks to all you who braved the rain and came out to the Season 2 Launch of Literature Alive at Camera on October 27th and 28th: it was a blast!

Friday night was a delirious affair for me. It was wonderful to recognize that we have completed not one, but two seasons of this miraculous series of documentaries on Caribbean writers.

It’s gratifying to know that the shows will continue to be sold into schools, libraries and universities here in Canada, so that young people can take in images and the voices of Olive Senior, Pam Mordecai, dbi.young, Dwayne Morgan, Lynton Kwesi Johnson, Miss Lou, (and on…) along with their Shakespeare and Austen.

Right there is proof of progress, because I never had that as a child…

Saturday was special because several of the writers came by and participated in an informal discussion with the audience, while watching the films. What emerged was each writers’ story of “the making of” their own documentary: how each experienced being the subject of our efforts to capture their vision and voice on film. For me it was an interesting, necessary and rare opportunity to complete a process, reflect on the journey, and get feedback from the individuals who I sought most to represent.

Thank you Shani, Nalo, Ramabai and Jemeni for participating in that afternoon with me.

Oh, and don’t forget to stay tuned on Thursday, 8pm on Bravo for Literature Alive!